Have someone ever hurt your deeply? Has a person you trusted turned against you? Remembering those things still brings pain, doesn’t it? Often we choose to protect ourselves by avoiding such persons and being very careful in choosing those to whom we make ourselves vulnerable. It hurts too much to take big risks!

God is not like us. He risked and received great pain by becoming human. Jesus never forced anyone to follow Him. He invited and then accepted their decision. But how it must have hurt when those He invited turned away. He went on to suffer rejection, shame and even death at the hands of human beings.

God goes ever further. Now, He actually lives inside those who follow Jesus. He knows our thoughts, sees our actions, and, I’m sure, cringes at some of the things we do and say. We can’t possibly understand the the risk to which God exposes Himself by being intimately personal with us. As author Philip Yancey puts it, “Words fail to capture the enormity of descent when a sovereign God takes up residence in a person and says in effect ‘Don’t hurt me. Don’t push me away.'”

Don’t reject Him. Trust Him. Listen to Him. When we do, we find that He, who risks being hurt by us, will never hurt us back.

The sovereign God gives a choice. We can turn away, or we can turn toward Him, honoring His presence in our lives by making Him our first priority.  Then, our hearts will be overwhelmed by the constant attention of our great Lover, who simply asks that we don’t hurt Him.

“My precious Lord, I want to be often and long alone with You.” – Gary Thomas

“Above all else, guard your heart, for it is the wellspring of life.” – Proverbs 4:23

That constant excitement is charming in a child, but not  in adults when it comes to our engagement in things around us. There should be varying levels of emotional response in our lives. If we are equally reactive to sporting events, politics, finances, work dramas, parenting, and social conflicts, there is no energy left for meaningful connection with God. We are simply too drained to love and respond to Him.

I’ve found it helpful to separate myself from involvements that are distracting or draining. I don’t spend much time with the news because, when I do, I am distressed. I try to take relationship conflicts to God immediately, instead of stewing about the situation for days or weeks. I daily commit my family members to God and His care so the concerns about them can fade into the distance. I do react emotionally to life around me, but I want every reponse to be appropriate to the situation.

The goal: To have God be the main focus of my emotional energy. To be mesmerized by Him, captivated by His love, curious about His Word, and longing for His presence. If I am going to say “Just what I always wanted!” about anything, I want it to be about Him! You, too?

“The more people rejoice over something outside God, the less intense will be their joy in God.” – St. John of the Cross 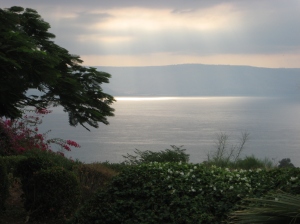 “When anxiety was great within me, your consolation brought joy to my soul.” – Psalm 94:19

Entering the stillness,
My folded hands
Remind me to slow.

Much to lay down.
Soiled garments of worry
one by one
worn too long.
Leave them.

Distractions of life
unwelcome intruders,
cluttering noise.
Turn them away.

A few deep breaths,
Air into the lungs, out of the mouth.
Refreshment coming in.
All that hinders going out.
The holy enters.
The mundane leaves.

The stillness begins to come.
Quieted mind,
Slowed body,
Ready just to be where He is.

Distractions return one by one.
I recognize them for what they are and
Know I will need to return to the stillness;
To the One who meets me there.
Soon.

“Collect yourself in His presence with the one purpose and intent of loving Him. . . Rest in love and come to Him in . . . faith, coming for no specific claim, request, or desire.” – Molinos

“Real prayer is nothing more than loving God.” – Fenelon

Everybody wants to be accepted for who they really are, not just for what shows on the surface. So, I really don’t want to judge people by appearance, wealth, religion, nationality, or color. And I don’t want people to judge me that way either.

In the parable of the Good Samaritan, we realize Samaritans were not acceptable to Jews. They were seen as people of mixed-pedigree, theologically wrong, and to be avoided.

I have to ask myself who today’s  “Samaritans” are to me? The addicted? The uneducated? The poor? Those of a particular nationality, religion, sexual orientation, or political persuasion?

Then I realize I am a “Samaritan” to some – one who is labelled as “Christian” and understood only by what they think that label means. I don’t want anyone to assume that, because I am a Christian, they know my views on social issues, politics, or science. I am an individual and want to seen as such. I imagine you do, too!

The shock of Jesus’ story was, of all the people passing by, it was the despised Samaritan who stopped to help the wounded Jew. This Samaritan didn’t fit His audience’s preconceived ideas of Samaritans as a group. Some of our present-day “Samaritans” don’t either!

Jesus dealt with people one at a time: The Syro-Phoenician woman, the Jewish leader’s daughter, the rich young ruler, Zaccheus the tax collector, and many others. He listened, touched, and forgave one person at a time, no matter their background. Maybe He expects us to do the same.

My newest devotional, The GodSense Journey: Exploring Sacred Pathways is available in both Kindle and print versions. The good news is that I have arranged for the Kindle version to be available for download for free from Friday, February 23, through Monday, February 26.

If you like the blog, but want to go deeper into your relationship with God, this book may be a helpful resource and a good companion for the journey. And, for the next few days, it’s free!

You can check it out by clicking the Buy on Amazon tab below or you can peruse the sample pages (including Table of Contents so you can see topics covered), then click on the Buy tab, even though there will be no charge.

“You hear, O Lord, the desire of the afflicted; you encourage them, and you listen to their cry.” – Psalm 10:17

The most soft-spoken person in the class asked, almost sadly, “Does prayer really work?” A silence followed. Who would dare to ask that question? Of course it works! But, deep inside, most of us have doubts, don’t we? She was brave enough to ask the question for us all. I had to think about it for awhile and, over time, have come up with the only answer I know.

If you mean, do I get what I ask for? Not often. Sometimes it seems I do. The anxiety lessens, the child gets better, the presentation goes well. At other times, the answer is not at all what I was looking for at all.

Sometimes prayer simply becomes a battleground for my spiritual life. My way or His? Will I accept what God wants even if I don’t want it? Jesus exampled it perfectly in the Garden of Gethsemane.

And sometimes, I get to be part of what God is doing in this world. In some small way, I may influence His work as others have done through the ages.

Always, though: Prayer connects me to God. Talking to Him grows my trust. When I listen for His response, I learn to know Him, and knowing Him changes me.

Yes, prayer works! For God’s glory, of course, but also for my good. There’s a lot about this I don’t know, but I do know this: I’m not going to stop praying just because I don’t understand. Most days, just being with Him is enough.

“If I seek some other reward besides God Himself, I may get my reward but I cannot be happy.” – Thomas Merton